What to Do if You Have Water in Your Crawl Space | New Haven, CT

A crawl space, similar to a basement, is susceptible to water and moisture damage because of its location in a house. It’s located underground. A vast majority of crawl space water leaks are not detected immediately, reason being, it is one of the least accessed parts of a building. And as the name refers, a crawl space requires one to crawl in order to access the area. Whenever a leakage is detected in this part of a house, an effective crawl space waterproofing technique should follow as soon as possible.

What determines the waterproofing procedure to apply?

The remedy leaks in crawl spaces will depend mainly on the construction work of the foundation, the nature of the issue that is letting in water, and the expertise of a contractor. The space may consist of a poured or block concrete foundation where water comes in. The cause of leaks in a crawl space may be as simple as a failed sump pump or as complex as a cracked wall due to ground settlement or poor structural construction work.

The sump pits may fill with sand, dirt, and rocks causing the unit to fail. In a building that initially had strong foundation walls, increased water around the masonry and concrete structure may create hydrostatic pressure. This pressure weakens the foundation and creates soft areas or weak zones, which crack and buckle thereby forcing water to penetrate and enter the crawl space. 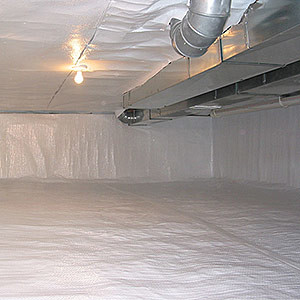 There are two ways to deal with water collecting in crawl spaces: interior and exterior waterproofing. Exterior waterproofing is regarded more intensive often requiring the ground to be excavated. It bars water from coming into the home’s interior by keeping it far from latent areas of entry like the porous concrete.

The ground around foundation walls is excavated and a highly engineered moisture barrier is installed to deflect water away from walls. A drainage system is installed, which helps reduce hydrostatic pressure thereby preventing cracks from forming.

The interior restoration work involves use of different techniques— all aimed at resisting, collecting, draining, and removing water — for example, use of sump pumps, air venting systems, and gravity discharge systems. A contractor may consider using a combination of crawl space waterproofing techniques to achieve results that are more desirable.